Variations on a Mongolian Folk Song 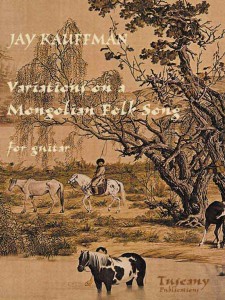 Listen to Variations on a Mongolian Folk Song:

Reviews “This is one of those fantastic-looking Tuscany editions, starting with an impressive front cover illustration of a painting by Lang Si’ning (One Hundred Horses at Pasture) The music is presented in traditional notation and tablature. The whole piece requires a special tuning: first string is normal (E), the second is tuned to C#, the third to G, the fourth to C#, the fifth to G, and the sixth again to C# The whole piece is in C# minor, and a very original and exotic sound is obtained by playing arpeggio open strings After a short introduction, the characteristic theme is presented and then developed through a set of attractive variations, following one after the other without interruptions or divisions Thre are some special effects, such as tremolo-brushing the strings with one finger, different arpeggio-strokes, and percussively produced damped sounds, giving the composition a really special and exotic flavor Regardless of the unusual scordatura, which can give some problems with tuning stability in the context of a regular concert program, this is the exact piece for any concert performer who wishes to present something special and new.”